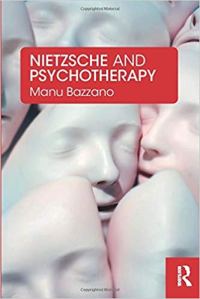 It is hard to know where to begin with Friedrich Nietzsche. Professor at 24, admirer of Heraclitus, Goethe and Schopenhauer, stateless after renouncing his Prussian citizenship and, philosophically, firmly in the camp of experimentation and individuation (self-direction), he is effectively the author of a large flare beneath which stand highlighted his many original, yet often contentious ideas.

Bazzano does an excellent job of introducing us to a great swathe of Nietzschean thought, unashamedly pitting his subject as a luminary doing battle against a parochial world. Indeed, from the very first page we are told that Nietzsche’s thoughts are “destined to remain untimely, even more so at a time when psychology and psychotherapy are being increasingly dominated by neopositivism and managerialism”. This is significant and ties in with Daniel Chapelle’s view that “most of those concerned with ‘mental health’, ‘behavioural science’, and ‘wellness’ – those handmaidens of social-political hygiene – have no clue.”

Strong stuff. And certainly a recurring theme throughout the book and not unwarranted. For Nietzsche’s ideas, however muscular and bold, resonate deeply and are not afraid to question everything. Philosophy is, after all – need we be reminded – another word for authorship or finding one’s own voice. And Nietzsche, through his unwavering challenge to that around him, provides the tools and provokes something vital inside the therapist that might otherwise have been left cowering or feeling marginalised and insubstantial.

God is dead. Fear has transformative potential. Individualism is but the narcissistic search for authenticity. The self is plural. Incongruence is inherent to human existence, with the self emerging from only a portion of the experiencing organism. All these bear the distinct Nietzschean hallmark, yet it is the beautiful line from Bazzano which focuses on Greek culture’s “Socratic slide into rationalism” which really gives potent leverage to this book; Socrates, that well-known, respected sage, brought to life by Plato yet thoroughly lambasted and admonished in this text.

The very soul of the philosophical endeavour is at stake, Bazzano is asserting and, by association, therapeutic space. Giving primacy to becoming is our task, thus purging the neat, Western obsession with being. What does this mean exactly? Well, I would echo Bazzano’s words and suggest that it amounts to accepting “the importance of struggle and conflict in human affairs” (polemos) rather than constantly being weighed down by the abstract extremes of being and nothingness.

Absolutes do not help us. Transcendental narratives merely have us waiting around for some fictitious divine glory. The self is not found but rather achieved – this seems to be the central premise upon which Nietzsche’s words toil. We are to honour and trust the senses and free ourselves from the shackles and fixation that the self can be made singular and whole.

Nietzsche is for the artist, creativity, axiology (the nature of value) and nihilism (life by itself is meaningless without elevation), and Bazzano impressively tasks himself with the 21st century responsibility of pulling us away from the bloodless “cult of ‘left-brain’ reasoning” into a formidable yet worthwhile land.

This site uses Akismet to reduce spam. Learn how your comment data is processed.